The History of Hannover

Hannover is first mentioned as the marketplace of “Hanovere” in a document which dates back to the year 1150. The medieval settlement on the bank of the River Leine was located on a site which was safe from floods, close to a ford and the junction between two major thoroughfares. There is still dispute about whether the name Hanovere came from “Hohes Ufer”, or High Embankment. In 1241, Hannover was granted a town charter from Duke Otto, grandson of Henry the Lion, Duke of Guelph. That same year, the townspeoplewere granted the right to use the forests of Eilenriede, which is now the largest city forest in Europe, covering an area of 640 hectares. The 14th century saw the construction of a town wall with 34 fortified towers, many of which still exist today (e.g. Pferdeturm, Döhrener Turm, Lister Turm, Beginenturm). The city gates (e.g. Steintor) and several Gothic churches (Marktkirche, Kreuzkirche) were also built around this time. Hannover enjoyed its first commercial boom, became a member of the Hanseatic League (Hanse) and had a population of around 4000. Hannover’s burghers tended to favour the reformationist movement and, at a gathering on the marketplace in June 1533, swore to support Martin Luther. The town council attempted to thwart this trend, but the will of the townspeople was stronger and the council fled to the Catholic town of Hildesheim. Hannover became a Protestant town.

Heyday as royal residence, electorate and royal seat of the Guelphs

In 1636, in the midst of the 30 Years War, Duke George of Calenberg made Hannover a royal seat in order to regain the territory he had conquered as a general for the Guelph dynasty. George of Calenberg was followed on the throne of the principality by his four sons. Although Hannover had to surrender various privileges because of its annexation to the Principality of Calenberg, the town flourished as never before: in 1666, for example, George’s 3rd son, Duke John Frederick of Brunswick-Calenberg, began work on the Great Garden and the construction of Herrenhausen Palace as the summer residence of the Guelphs. He also summoned one of the most important philosophers of the 17th/18th centuries to the court and this was where Gottfried Wilhelm Leibniz (1646-1716) developed his visionary ideas. The privy councillor and librarian, mathematician and philosopher lived in Hannover from 1676 to 1714. George’s 4th son, Ernest Augustus (1629-1698), was crowned Elector in 1692 and transformed the Hanoverian court into one of the most sumptuous in Germany. His wife, Electress Sophia of the Palatinate, appreciated pomp and ceremony and cultivated intellectual life at the court. She devoted her life to the Great Garden, which was substantially enlarged and redesigned in the Dutch baroque style. The role of electorate also gave Hannover political weight in the country, attracting visits from famous names from Germany and abroad such as Georg Frideric Handel, who was appointed Capellmeister at the court of Ernest Augustus’s son Elector George Louis in 1710. The rank of electorate combined with Sophia’s claim to the English throne (Sophia’s mother was the English princess Elizabeth Stuart) provided Hannover with unprecedented opportunities to shape the history of Europe.

Electress Sophia, the designated heir to the throne, died in 1714, and the British Queen Anne shortly afterwards. According to the Act of Settlement, the throne then passed to Sophia’s son, Elector George Louis of Hannover: he was crowned George I of Great Britain in 1714, marking the start of the Personal Union between Hannover and the Kingdom of Great Britain which was to last for 123 years. George I moved his court to London and ruled over the electorate from there. Hannover, which depended on the court, and the gardens in Herrenhausen were neglected and were left to slumber unattended for decades. However, it was thanks to this that Herrenhausen retained its unspoilt character, because other baroque gardens of the day were converted to conform to the contemporary ideals of English landscape gardening. The Electoral House of Hannover (and simultaneously Royal House as from 1814) reigned over Great Britain in Personal Union for five generations until 1837: under the Hanoverian law of succession, Victoria, Queen of Great Britain and niece of William IV, could not become Queen of Hannover. Instead, her uncle, the Duke of Cumberland acceded to the throne at the age of 66 as Ernest Augustus I, King of Hannover and Duke of Brunswick-Lunenburg, ending the era of Personal Union.

In 1825, Hannover was the first city in Germany to have gas lanterns. Georg Ludwig Friedrich Laves (1788-1864), renowned architect and town planner, had a decisive influence on the development of Hannover (Ernst-August-Platz, the central railway station, Georgsplatz, Königstrasse, Waterlooplatz, the Waterloo Column, the Opera House, Wangenhaim Palace, the Laves House etc.) laying the basis for the present cityscape and its street layout. Inauguration of the first railway line in 1843 set the industrialisation process in motion. “Maschinenfabrik Egestorff”, later renamed Hanomag (Hannoversche Maschinenbau AG), produced steam locomotives. In 1866, the Guelph dynasty was overthrown and Hannover was reduced to the status of Prussian provincial capital. Hannover rapidly grew into a city and by the year 1873 already had a population of 100,000, a figure which was to double in just under 20 years. Some major business enterprises, such as the Continental-Cautchouc- und Gutta-Percha Compagnie (1871) and Bahlsen (1897), were founded at that time. With a workforce of 3000, Mechanische Weberei was the largest weaving mill in Europe in 1885. Germany’s first small car, the Hanomag 2/10 PS – whose round shape earned it the nickname “loaf of bread” – rolled off the Hanomag assembly line in 1924. At the turn of the century, many small towns and villages were incorporated into Hannover, increasing the need for schools. It was at this time that Hannover Technical University was founded, in the palace of the House of Guelph, as well as the University of Veterinary Medicine.

The Weimar Republic ended when Hitler was appointed Chancellor of the Reich on 30 January 1933. In May 1940, Hannover suffered the first air raids and further bombardments went on to destroy factories, residential buildings and monuments (e.g. Conti, Leine Palace, Market Church, the Opera House, Herrenhausen Palace). 88 air raids destroyed more than 50% of Hannover, with more than 90% of the buildings in the city centre hit. Hannover became a British occupation zone. The post-war years in Hannover were marked by the lack of labour and the sight of forced labourers, extreme scarcity of food and horrendous flooding (1946). The bomb-damaged ruins of Ägidienkirche (St Giles Church) were left standing as a memorial to World War II. In the early 1950s, 2.5 million cubic metres of rubble were recovered and used to build the spectator stands at Niedersachsen Stadium (now HDI Arena). Four models in the foyer of the New Town Hall show the different development stages of the city, including the degree of destruction in 1945 at the end of the war.

The years of the economic miracle

In 1946, Hannover was made capital of the newly formed state of Lower Saxony. The first export fair was staged in Hannover in 1947 with the aim of boosting the economy. Over the next few years, this fair was to become symbolic of the German economic miracle. Vast numbers of visitors flocked to the event, which also attracted an increasing number of exhibitors from other countries. As the logical consequence, Hannover-Langenhagen Airport was inaugurated in 1952. This was the start of a unique period of economic expansion: the Volkswagen Stöcken plant, where VW vans were manufactured in the mid-1950s, was built on the banks of the Mittelland Canal. Preussag AG (now TUI) transferred its headquarters to the capital city. Decades later, this was to become the largest tourist business in the world. In 1954, the population of Hannover passed the 500,000 mark. A new urban development concept of dual carriageways, expressways and roundabouts was implemented to cope with the increasing number of private cars. In the city centre, the triangle between Steintor, railway station and Kröpcke Square evolved into the central shopping district and work on the underground railway began in 1965. That same year saw the inauguration of Hannover Medical School (MHH), which is now home to Germany’s largest transplant centre. One year later, the city began work to restore the Great Garden and large residential areas were created around the outskirts of Hannover.

Over the years, the Hannover trade fair concept has been systematically expanded, also in terms of range and size. The exhibition grounds, which are the largest in the world, comprise 26 halls and four pavilions and have approx. 466,100 m2 indoor and 58,000 m2 outdoor area. HANNOVER MESSE industrial fair and, since 1986, the CeBIT computer show– the flagship events amongst the numerous fairs held in the state capital – are leading international events. Deutsche Messe AG, Hannover, ranks as one of the top trade fair organisers in the world and handles major global fairs in highly diverse sectors of trade and industry. In 2000, around 18 million visitors came to Expo 2000 World Exposition (whose motto was “Humankind, Nature and Technology – a new world arising”), for which the exhibition centre had been specially refurbished. At the same time, Hannover evolved more and more into a coveted venue for events, conferences and congresses with attractive locations such as the Convention Center, Expo Station, HCC, HDI Arena and Herrenhausen Palace. 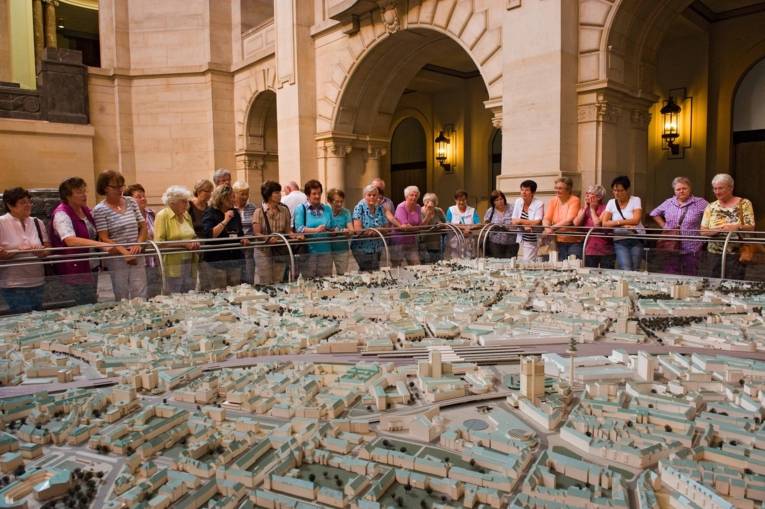